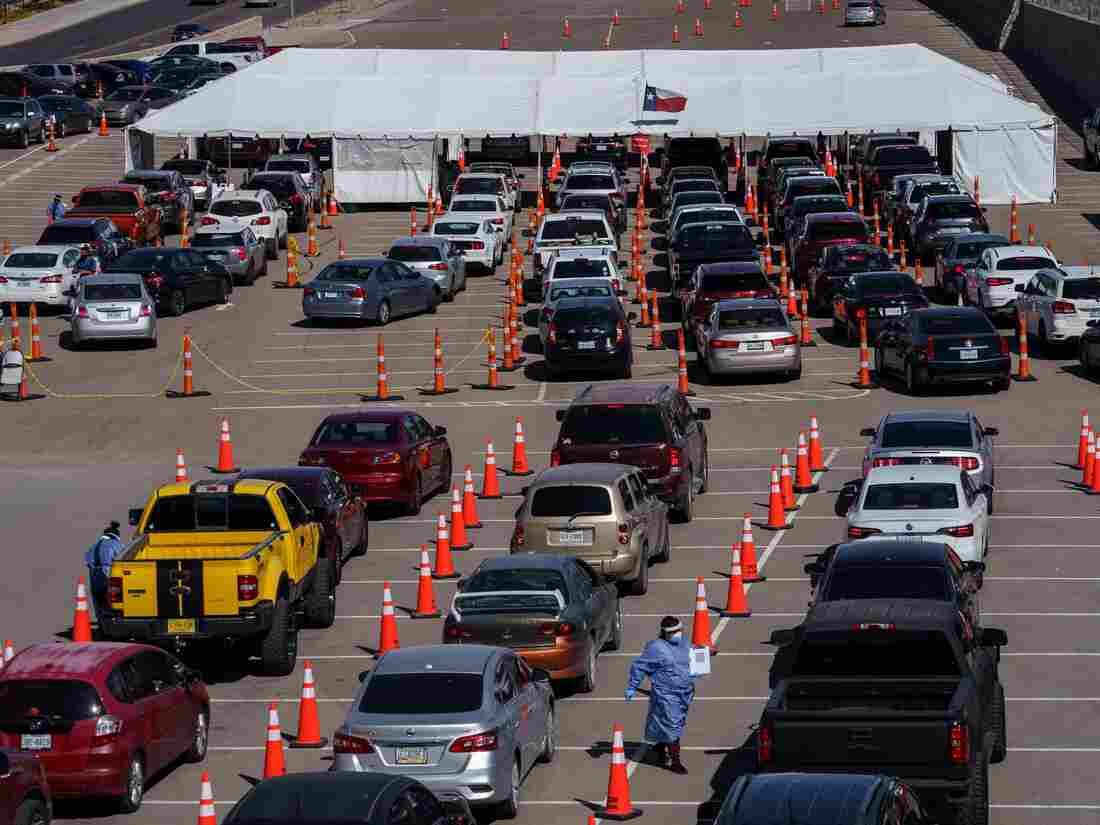 Cars line up Friday at a coronavirus testing site at the University of Texas at El Paso. The area has seen a surge in cases in recent weeks, and a two-week curfew is now in effect in El Paso County. Paul Ratje/AFP via Getty Images

With new coronavirus cases on the rise, residents of El Paso, Texas, nestled on the U.S-Mexico border, are encouraged to stay home for two weeks as a judge imposes a mandatory curfew.

Noting that area hospitals are overrun and the positivity rate of residents has ballooned since the beginning of the month, El Paso County Judge Ricardo Samaniego said he was “left with no choice” but to impose a countywide curfew from 10 p.m. to 5 a.m.

The order went into effect Sunday and is set to expire at 11:59 p.m. on Nov. 8. Residents are only permitted to leave their residences from 10 p.m. to 5 a.m. for emergency reasons.

“Our hospitals are now at a point where they are overwhelmed and exhausted, and I am left with no choice but to take this next step in hopes of seeing some stability in our community and most importantly to save lives,” Samaniego said in a statement.

He noted that El Paso County has seen a 160% increase in its positivity rate in the last three weeks. There has also been an 300% increase in hospitalizations over that time, he said, adding that all area hospitals have reached capacity as of Saturday, including intensive care units.

Law enforcement officials are authorized to enforce the curfew, along with $250 fines for those not wearing a face covering. A fine for any other violation of the order is double that amount, according to the statement.

The curfew comes as Texas Gov. Greg Abbott announced the U.S. Department of Health and Human Services is deploying teams to help local officials combat the coronavirus surge in the El Paso area.

HHS will send two 35-person Disaster Medical Assistance Teams and a Trauma Critical Care Team to the region along with other assistance, according to Abbott’s office.

“Texas is grateful to the U.S. Department of Health and Human Services for providing these crucial resources and for working alongside state and local officials to combat the spread of COVID-19 in El Paso,” Abbott said in a statement.

“We are working closely with our federal and local partners to meet the needs of the El Paso community and ultimately bring hospitalizations down.”

After having some success with contact tracing efforts, medical officials in El Paso have struggled in recent weeks with their ability to inform people in a timely manner they may have been exposed to the deadly virus, NPR member station KTEP in El Paso reported.

The portion of people who were notified within two days they were exposed to someone who tested positive for the coronavirus “plummeted from 88 percent on Oct. 1 to 32 percent on Oct. 23,” according to KTEP.

“Not enough of the people are responding to contact tracing. And we don’t have that sort of precision around where exactly the cases are coming from to target,” Alozie added.

More than 71,000 new infections were recorded in the U.S. on Thursday. It was the most in a single day since July, according to the Johns Hopkins Coronavirus Resource Center, which tracks infections around the world.

The U.S. leads all other nations with number of cases and deaths from the virus. More than 8.6 million Americans have tested positive for coronavirus and more than 225,000 have died.