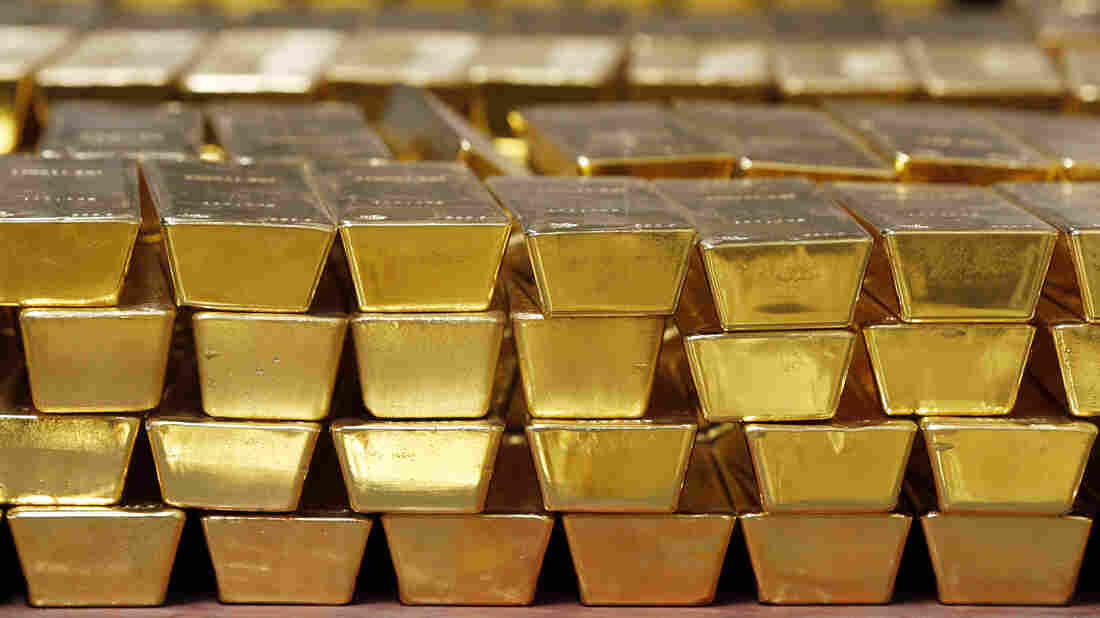 Gold bars are stacked in a vault at the United States Mint, in West Point, N.Y., in 2014. The settlement price for gold futures reached a record high of $1,931 per ounce Monday — and many analysts predict the price will head even higher. Mike Groll/AP hide caption

In uncertain economic times, investors tend to put their money in gold. So it’s perhaps little surprise that gold prices started to rise at the beginning of the year as the coronavirus started spreading in China and Europe and investors feared a global economic downturn.

Gold prices have soared nearly 30% so far this year. On Monday, the settlement price for gold futures reached a record high of $1,931 per ounce — and many analysts predict gold will top $2,000 by September.

Gold usually rises alongside investors’ uncertainty in the economy. It’s a “safe haven” for investors who want to hedge their bets against a falling dollar and instability in financial markets, said Lindsey Bell, chief investment strategist for Ally Invest.

And, as long as investors are still unsure about the health of the market, they’ll continue putting money into gold, she said.

As the pandemic slammed the economy in March, the Federal Reserve slashed U.S. interest rates to historic lows to keep the economy afloat. “Gold historically has moved in the opposite direction of the interest rate and the dollar,” Bell explained.

Though high gold prices could be an indicator of uncertainty in the economy, financial markets have generally been performing well — in large part thanks to aggressive steps taken by the Fed. The S&P 500 stock index, which dropped 34% from its record high in March, is now up slightly for the year.

“They threw a lot of money at the market to make sure it was operating efficiently back in March when things all came to a head,” Bell said. She noted that the Fed’s actions accompanied “government stimulus measures like the $1,200 checks, PPP loans and unemployment relief.”

But Bell notes that putting all of this government money in the system creates more government debt. This drives more people to buy gold as a hedge against potential inflation caused by the mounting debt.

Another factor Bell and other analysts point to is the rise in tensions between China and the United States. The two countries have been locked in a trade war since 2018, slapping hundreds of billions of dollars’ worth in tariffs on each other’s goods. The two countries signed a preliminary trade deal in January, but tensions intensified recently after the U.S. forced China’s consulate in Houston to close, prompting a reciprocal closure of the U.S. consulate in Chengdu.

“As that relationship moves backwards, you could see the slowdown of trade and economic activity between the two countries, and that then leads to uncertainty which leads to investors going to ‘safe haven’ assets like gold,” Bell said. Concerns over the ongoing global struggle against the pandemic are another major reason for uncertainty.

Justin Waring, a strategist at UBS Global Wealth Management, says the dollar’s recent weakness is due in part to the deteriorating ability of the U.S. to control its COVID-19 outbreaks.

“As the economic-reopening efforts are delayed or rolled back in some parts of the country, markets have started to price in a slower U.S. recovery,” Waring said.

He said financial markets are unlikely to stabilize until a coronavirus vaccine is widely available. Markets will remain volatile “until we have a clearer understanding of when the economy can get back to ‘normal,’ ” he said.

And as long as that uncertainty continues, gold prices could keep rising, analysts said.