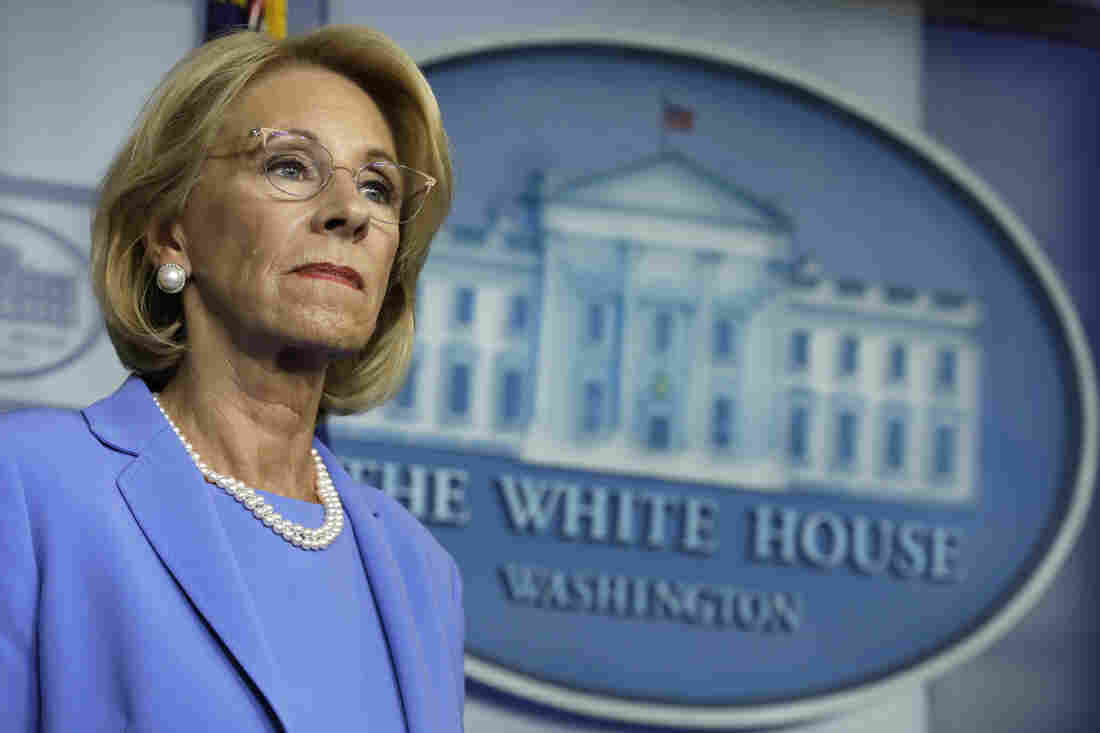 U.S. Education Secretary Betsy DeVos backed a rule that would have increased private schools’ share of CARES Act dollars from $127 million to $1.5 billion, according to one analysis. Yuri Gripas/Bloomberg/Getty Images hide caption

A controversial rule backed by U.S. Education Secretary Betsy DeVos, and meant to reroute millions of dollars in coronavirus aid to K-12 private school students, has been shut down, at least temporarily.

The U.S. Education Department announced Wednesday that the rule is no longer in effect, after a federal judge determined that the department had not only “acted beyond its authority” but misinterpreted the will of Congress.

At the center of this months-long fight between DeVos and public school advocates is the CARES Act, passed in March. The law set aside more than $13 billion in federal aid to help schools cover their budget-crushing pandemic costs.

Plaintiffs in the lawsuit, led by the NAACP, argued that the money was meant to be distributed to public school districts based on how many low-income students they serve. For private schools, lawmakers required districts to set aside a small portion of that money to pay for “equitable services” such as tutoring or transportation, though only for those schools’ low-income students.

In a Sept. 4 decision vacating the rule, Judge Dabney Friedrich, of the U.S. District Court in Washington, D.C., wrote, “it is difficult to imagine how Congress could have been clearer” about its intention that these equitable services be reserved for low-income students only. “The Department’s arguments to the contrary do not change this straightforward conclusion.”

According to one analysis by the Learning Policy Institute, the department’s reading of the CARES Act would have increased private schools’ share of CARES Act dollars from $127 million to $1.5 billion. The department first issued its controversial interpretation of the law in late-April, in the form of guidance. While that guidance was nonbinding, the interim final rule announced in June was enforceable by law.

“The CARES Act is a special, pandemic-related appropriation to benefit all American students, teachers, and families impacted by coronavirus,” DeVos said in June. “There is nothing in the law Congress passed that would allow districts to discriminate against children and teachers based on private school attendance and employment.”

In a June statement, Daniel A. Domenech, executive director of the School Superintendents Association (AASA), called the rule “an opportunistic money grab, using the pandemic environment to advance the privatization agenda.”

In announcing the rule, the Education Department lamented that “most private schools serving low- and middle-income communities are under great financial strain due to COVID-19” and that “more than 100 private schools have already announced they will not be able to reopen following the pandemic, and hundreds more are facing a similar fate.”

Public school advocates argue this fight over how federal aid dollars should be used has forced districts to delay spending, even as their COVID-related costs mount. In an August statement, Rep. Bobby Scott, the Democratic chairman of the House education committee, wrote, “I once again implore the Department to abandon its unlawful equitable services rule and finally provide schools the clarity and resources they need to cope with this unprecedented crisis.”

As a result of the court’s decision, the rule is no longer in effect, but the Education Department tells NPR that it has not officially rescinded the rule and could still decide to appeal.