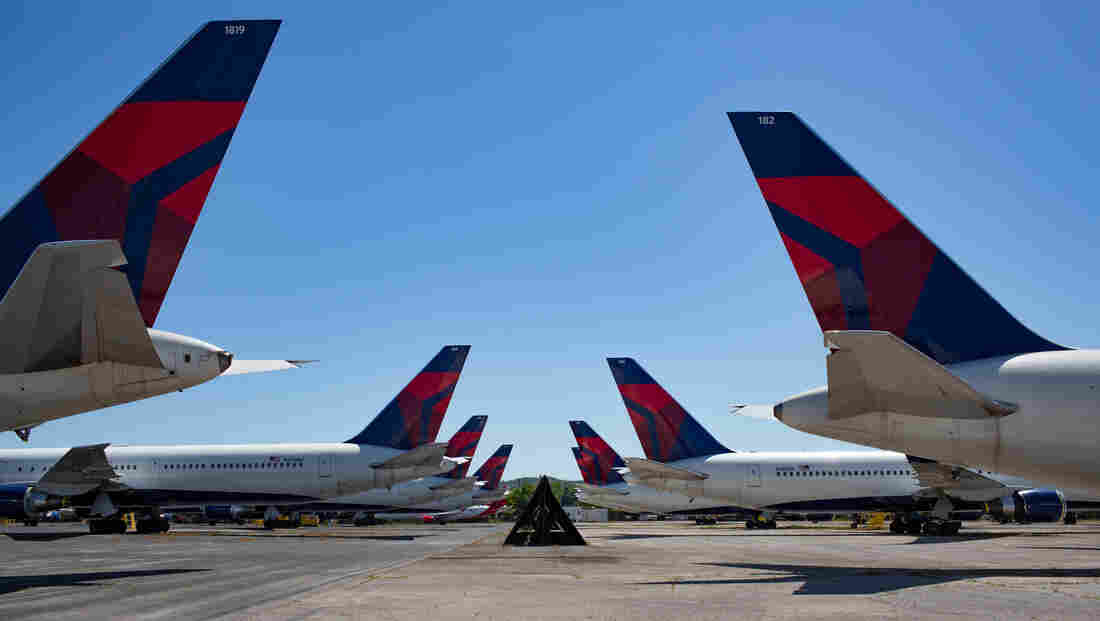 Dozens of Delta jets have been parked on the tarmac of the Birmingham-Shuttlesworth International Airport since last spring. The airline reported $5.4 billion in third quarter losses on Tuesday. Russell Lewis/NPR hide caption

With summer vacation travel weaker than expected and business travel a fraction of what it used to be, the losses continue to mount at Delta Air Lines.

Delta, the nation’s second largest airline by the number of passengers flown last year, reports losing $5.4 billion in the third quarter of this year, as the travel industry continues to suffer from low demand due to the coronavirus pandemic. Add that to the $5.7 billion loss reported in the second quarter, Delta’s total losses due to the pandemic rise to more than $11 billion.

Despite assurances from Delta and other airlines that transmission of COVID-19 is relatively rare on planes, most would be travelers steered clear of flying.

After implementing deep airplane cleaning protocols and requiring passengers and crew to wear face masks, the industry had hoped for a boost in air travel over the normally busy summer months. But after a brief uptick around the July 4 holiday, sharp increases in COVID-19 cases in many cities and states and quarantine mandates for Americans traveling abroad had a chilling effect on air travel demand, and the number of people flying in July, August and September was around 70% lower than a year ago.

Delta CEO Ed Bastian suggests it may take a lot longer than initially thought for air travel demand to return.

“We do believe it could still be two years or more until we achieve a normalized revenue environment,” Bastian said on a conference call with reporters and analysts Tuesday. “Until then, we will be smaller in the short term, but also more agile and more efficient.”

Bastian acknowledged that more profitable business travel, which is down about 85% from a year ago, may take even longer to fully bounce back, with many business trips likely being replaced by meetings and conferences on Zoom, GoToMeeting, and other video conferencing platforms.

“We could be looking at anywhere from 10% to 20% reduction in the in the next couple of years when we get to that new normal of business travel,” he added.

Some aviation industry analysts find that revelation a concerning sign.

“Business travel was 50% of their revenue at one point,” Peter McNally, an analyst at Third Bridge Group in New York, told the AP. “It’s a market that Delta has made the core of their business, so they will be forced to compete harder on the leisure side of the market to make up for that loss.”

Delta executives say they are beginning to see an uptick in bookings by leisure travelers for the November and December holidays.

“It’s slow, but it’s steady — week by week, they are coming back,” Bastian said of passengers.

With so few people flying, Delta has parked scores of planes and has plans to retire many of its older jets, about 400 of them, by 2025.

Delta has reduced its cash burn rate from a peak of close $100 million a day in April and $27 million a day over the summer, but the airline is still losing a little more than $18 million a day, as revenue in July, August and September was down 76 percent from the same three months last year. Near record air travel demand in the third quarter last year helped Delta record a profit of $1.5 billion.

About 18,000 Delta employees, close to 20% of the airline’s work force, have taken early retirement or other incentive packages to leave the company voluntarily. In addition, close to 40,000 employees have taken voluntary unpaid leaves of absence. Those voluntary actions save the airline $1.9 billion, and unlike competitors American and United, Delta has been able to avoid employee layoffs and furloughs, thus far.

But that could change Nov. 1. Delta is asking its pilots to accept steep pay cuts, and if negotiations with the pilots union fail to produce an agreement, the airline could begin to furlough 1,700 pilots next month.

Delta received $5.5 billion in federal grants to cover payroll costs from April through September — which is its share of the $25 billion given to the industry as part of the CARES act. Delta still has about $1.3 billion of that aid left that it can continue to use to keep employees on the payroll.

“We’ve stretched those dollars out,” Bastian said, adding that he supports industry efforts to secure additional airline aid from Congress. There is bipartisan support in Washington for an extension for the payroll support program, but a deadlock over a broader coronavirus relief package has stalled action on assistance for airlines.