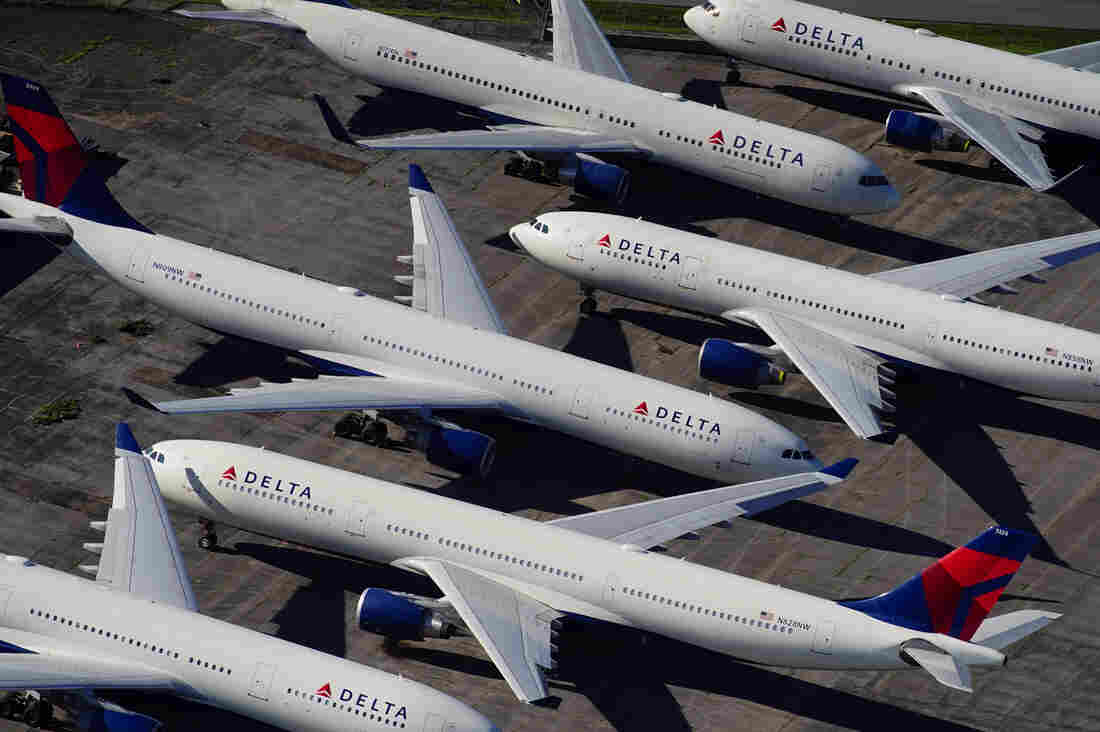 Delta Air Lines is flying only about 25% of the schedule it did last summer. Elijah Nouvelage/Reuters hide caption

In the history of commercial air travel, airlines have never had a stretch as bad as the last few months. Early in the pandemic, Delta Air Lines was losing $100 million each day. Now it’s losing about $27 million a day.

While Delta is making “good headway” on reducing its cash burn, the most important factor for financial recovery is something that’s largely out of the industry’s control, says Ed Bastian, the company’s CEO.

“The bottom line is we’ve got to restore confidence amongst our consumer base in air travel,” he tells NPR.

In an interview on All Things Considered, Bastian describes Delta’s strategy to prioritize customer safety over filling planes — with an eye toward long-term viability.

“We believe that taking care of safety of our customers, as well as our people, is more important than the profits that we forgo by filling up every seat on a plane,” he says.

And more than bailout money, what the industry ultimately needs, Bastian says, is for the federal government to focus on finding a cure or vaccine for the coronavirus.

Here are excerpts from the interview.

Can you summarize what it takes to get from losing $27 million a day to breaking even?

To reduce the cash burn, to break even, requires the demand to continue to pick up.

We’re flying today somewhere about 25% of the schedule that we did last summer. We’ll need … another 10 to 20 points of demand over the next six months to get closer to that break-even level on cash flow. It’ll depend on the direction the virus takes, the direction that — both on therapeutics as well as vaccines — the ability for people to feel confident and the continued taking great care and safety of our customers over the journey. We have implemented so many changes in our safety protocols, our customer surveys tell us that this is the best travel experience on Delta they’ve ever seen.

In addition to the health concerns, is it partly a business consideration that by leaving middle seats open — by only booking 60% full — you will get more people to fly your airline than other airlines that are trying to save money by filling up the plane, for example?

We could do that if we chose to. But we feel that we’d rather take care and put safety at the top of the priority list. And when we get close to that 60% load factor that we’ve referenced, that’ll be our trigger to add more planes and more flights into the schedule, because we have a lot of planes that we can add rather than trying to put more people into the existing [flights]. It’s a decision we’re taking about putting people over profits, absolutely.

Getting fast coronavirus test results is key, especially for flight attendants. … Are you able to get real-time information on when someone tests positive for COVID-19?

The time it takes to get the results back for our people has extended up to a week, which is unacceptable. We now have it down to somewhere between two to four days. The good news is that the testing that we’re doing on our people is verifying that the aircraft is a very safe enclosed space, because our flight attendants, our pilots, our ground workers, our airport workers … some are positive, absolutely. But at much lower rates than any national average that I’ve seen. And those are for people that live in the airport environment.

Delta got more than $5 billion from the CARES Act, which Congress passed back in March. What about a second aid package from the federal government? Is that something that you would anticipate needing if the pandemic keeps going?

What we really need is instead of more government support, we need demand back. We need a medical cure. We need a vaccine. We need therapeutics. And I think that’s probably where any government focus ought to go.

Becky Sullivan and Jolie Myers produced and edited the audio story. Maureen Pao adapted it for the Web.