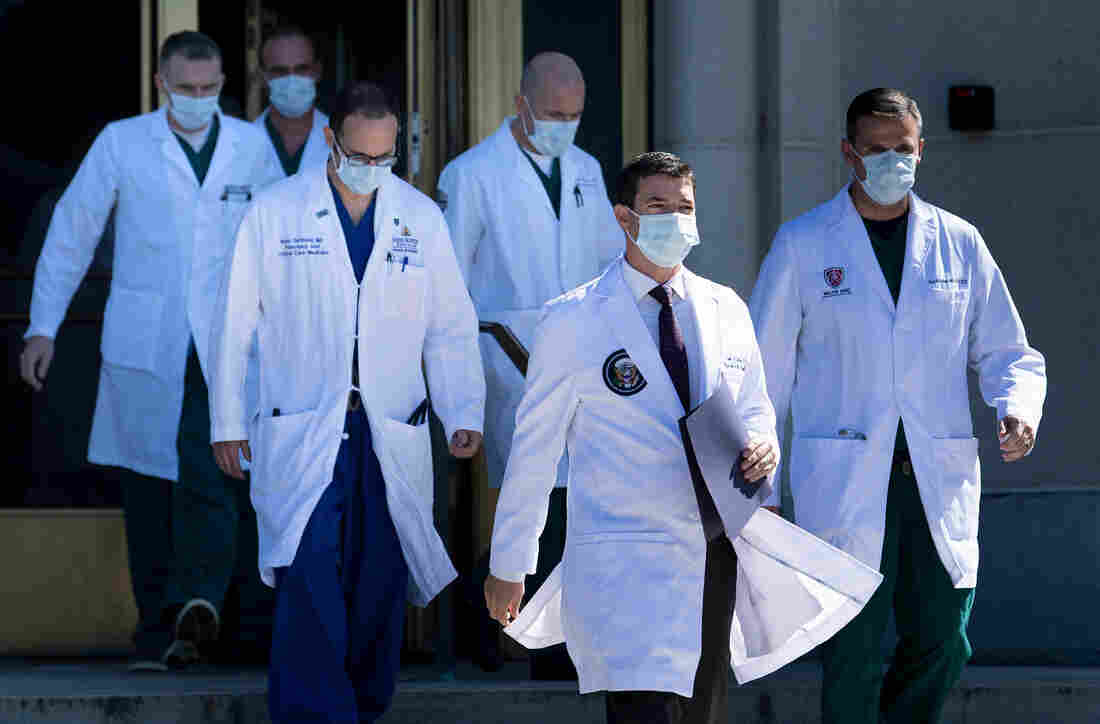 Like hundreds of thousands of Americans who have been hospitalized with the coronavirus, President Trump is recovering at home after being discharged. Unlike most Americans, his home is equipped with a medical unit, where he will receive around-the-clock medical care from a team of physicians and nurses.

And the differences between his treatment and many people’s don’t stop there. The President has received cutting-edge care and VIP treatment since his diagnosis with COVID-19 last week, including a combination of treatments that would not have been available to most Americans early in the progression of the illness.

“The President received experimental therapies that no one has access to,” says Leana Wen, an emergency physician and public health professor at George Washington University. “As far as we know, the President is the only person in the world to have received this combination of treatments,” she says.

Since his diagnosis, Trump has received these key interventions: supplemental oxygen, steroids, an experimental antibody cocktail, and the antiviral medication remdesivir.

Part of the treatment was standard, says Dr. William Schaffner, a professor of infectious diseases at the Vanderbilt University Medical Center in Nashville, Tennessee. “I think most good hospitals would provide the basic structure of that sort of treatment to their patients across the country.”

But, he adds, treatment with the antibody cocktail made by Regeneron is the one exception — that’s still in clinical trials and has not been granted emergency use authorization by the federal government.

“Those monoclonal antibodies… would not have been available to others,” Schaffner says.

Fewer than ten people have received this intervention, Alexandra Bowie, a spokesperson for Regeneron wrote to NPR in an email. “The only way to access the drug at this point is through a Compassionate Use request or clinical trial participation,” she adds, and compassionate use requests are only approved in rare and exceptional circumstances.

“And we still do not know if they are effective,” notes Schaffner, as the drug is still being studied in a clinical trial. “That was kind of a chance they took.”

The President and his physicians have maintained that his symptoms were mild and he was generally healthy during his hospital stay. But both remdesivir and dexamethasone are usually only given to patients who are severely ill with COVID-19 and often later in the course of their illness.

“We’re in a bit of uncharted territory when it comes to a patient that received the therapies he has so early in the course,” Dr. Sean Conley, the White House physician said at a press briefing Monday.

Some public health experts believe that the fact that Trump’s oxygen levels dipped below 94% at times and that he received these treatments is evidence that he was sicker than reported.

Now that the President is home, he continues to get exceptional medical care.

“Going home to the White House and the medical staff there is not exactly like going home if you are anybody else,” notes Wen.

The White House contains a medical unit staffed by a large team of highly qualified health care professionals providing care to the President, his family and everyone else at the White House, says Dr. William Lang, who served as a member of that unit between 1996 and 2007 — under Presidents Clinton and Bush — and was the director of the team 2006-07.

“These are physicians, nurses and mid-level professionals who have been vetted at the highest level to ensure that they have the experience, training and academic background that is of the highest caliber possible,” adds Lang.

The unit usually has between five and eight physicians, six nurses (typically all critical care), and other medical staff, he says.

The in-house doctors serve as the “hands and eyes” on the ground, and they discuss the case with specialists” at Walter Reed Military Medical Center. And they often collaborate with experts at the National Institute of Health, as well, he adds.

And while he doesn’t know the details about Trump’s ongoing care, Lang says, “I would be willing to bet that the specialists are coming down anyway and meeting down there.”

The White House clinic is also equipped with the monitoring equipment one would find at a hospital ICU, he adds.

“The White House is not your typical home,” Lang says. “There are a lot of capabilities that you and I are not going to have at home.”

Returning home from the hospital looks very different for many of the Americans hardest hit by COVID-19, notes Dr. Chris Pernell, a public health physician and the chief strategic integration and health equity officer at University Hospital, in Newark, N.J. Pernell lost her father to Covid-19 in April.

The pandemic continues to take a disproportionate toll on marginalized communities of color, she says. Most people would not have access to continuous monitoring and at-home medical care, and many would return to a “crowded apartment” where their “family would be at increased risk because of crowded living conditions.”

Many people hospitalized with COVID-19 have low paying jobs with no savings, and so often struggle to get by as they recover at home, she adds.

And many people who have been sick take a long time to recover. Pernell’s sister was diagnosed in April, after her father died. And she hasn’t been well enough to return to work since.

Trump said Tuesday on Twitter that he would soon resume campaigning and plans to attend next week’s presidential debate.