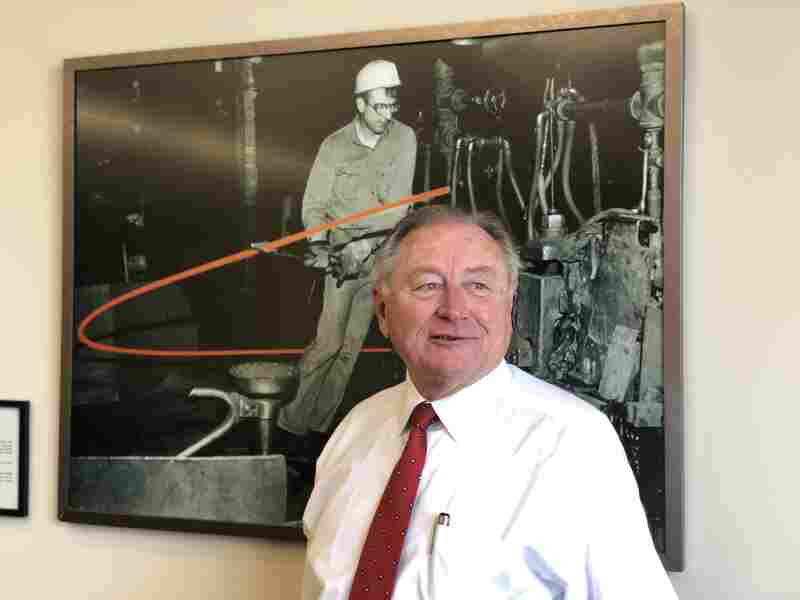 Nick Gradisar is the mayor of Pueblo, Colo., a former steel town with a population of about 100,000. Colorado as a whole is one of more than a dozen states that recently set a seven-day record for positive COVID-19 cases. Gustavo Contreras hide caption

In the early stages of the coronavirus pandemic, the hardest hit areas were big cities, from Seattle to New York. But now, eight months after the crisis hit the U.S, new cases are surging in some small towns and rural areas around the country.

Colorado is among more than a dozen states that set a seven-day record for positive COVID-19 cases on Tuesday.

One place seeing a significant spike is Pueblo, a former steel town with a population of just over 100,000 that is nearly 50% Hispanic.

Pueblo Mayor Nick Gradisar says that the recent increase in cases could likely be due to a combination of people relaxing during the summer, schools and the local university going back in session, and more extended family gatherings.

But ultimately, he says, “we haven’t been able to put our fingers on exactly what it is.”

“As we learn more and more about the virus, it’s obvious that we’ve got to take protective measures, even if we’re among friends or extended family members if we’re going to prevent the spread,” Gradisar says.

In excepts from his interview on NPR’s All Things Considered, Gradisar discusses managing the coronavirus in his town, contact tracing and adapting new traditions.

On whether people who test positive are disclosing close contacts

There’s been some reluctance, I think. The reports I get from the health department is that some people don’t answer the phone when the health department calls and there’s been some reluctance for people to share their information. We’re hoping that we’ll get some new people trained up and can change that a little bit so that we’re able to quickly identify who’s been exposed and infected by the virus and get them to quarantine and stay out of circulation.

On whether contact tracers have necessary language skills and cultural competence

They do. And we will be making an effort in this next round of hiring these contact tracers to make sure that they have those bilingual skills so that they can reach as many Puebloans as possible.

Pueblo is not really a tourist town. So to that extent, at least we haven’t been as severely affected as other parts of Colorado have. I’ve been quite surprised at our sales tax numbers and the fact that they’ve remained pretty constant. We had some months where they went down, but not nearly as much as we predicted. So in terms of sales tax collections, which is a reflection of economic activity, Pueblo has done pretty well so far.

On the upcoming holidays and family gatherings

This year has to be different. Don’t do it. It’s too risky. And the fact that it’s important that we not get extended families together for Thanksgiving this year. If we do, chances are that some of the people will be spending Christmas on a ventilator in the ICU unit because we don’t have this virus under control at this point. There’s not an effective vaccine. So be careful.

Usually on Christmas Eve, I’ve got 40 or 50 people at my house. We have Santa Claus come for the grandkids and the great-grandkids, but this year’s going to be different. It’s not the end of the world. This is sort of going to be a lost year, but we’re going to get through it. And hopefully by this time, next year, things will be much, much better in terms of our response to the pandemic.

Gustavo Contreras, Adriana Tapia and Jolie Myers produced and edited the audio version of this story. Christianna Silva adapted for the Web.