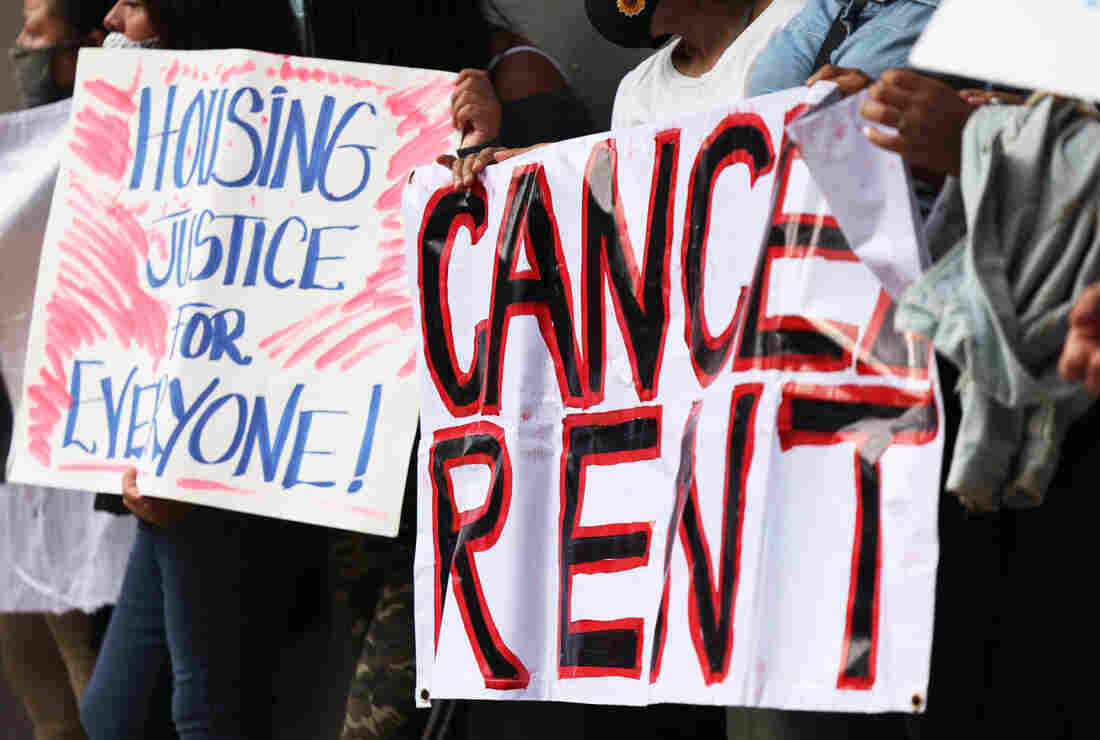 Demonstrators hold up signs as they gather at Brooklyn Housing court during a ‘No Evictions, No Police’ national day of action in New York City. Michael M. Santiago/Getty Images hide caption

The Trump administration is ordering a halt on evictions nationwide through December for people who have lost work during the pandemic and don’t have other good housing options.

The new eviction ban is being enacted through the Centers for Disease Control. The goal is to stem the spread of the COVID outbreak, which the agency says in it’s order, “presents a historic threat to public health.”

It’s by far the most sweeping move yet by the administration to try to head off a looming wave of evictions of people who’ve lost their jobs or taken a major blow to their income due to the pandemic. Housing advocates and landlord groups both have been warning that millions of people could soon be put out of their homes through eviction if Congress does not do more to help renters and landlords and reinstate expanded unemployment benefits.

But this new ban, which doesn’t offer any way for landlords to recoup unpaid rent, is being met with a mixed response. First, many housing advocates are very happy to see it.

“My reaction is a feeling of tremendous relief,” says Diane Yentel, CEO of the National Low Income Housing Coalition. “It’s a pretty extraordinary and bold and unprecedented measure that the White House is taking that will save lives and prevent tens of millions of people from losing their homes in the middle of a pandemic.”

That said, she adds that a move like this from Congress or the White house is “long overdue.” And she says with no money behind it, it kicks the can down the road.

“While an eviction moratorium is an essential step, it is a half-measure that extends a financial cliff for renters to fall off of when the moratorium expires and back rent is owed.”

Landlords are worried about falling off a cliff too. Doug Bibby is the president of the National Multifamily Housing Council. He says, “We are disappointed that the Administration has chosen to enact a federal eviction moratorium without the existence of dedicated, long-term funding for rental and unemployment assistance.”

“An eviction moratorium will ultimately harm the very people it aims to help by making it impossible for housing providers, particularly small owners, to meet their financial obligations and continue to provide shelter to their residents,” Bibby said. He’s calling for a myriad of financial assistance measures to help property owners.

Under the rules of the order, renters have to sign a declaration saying they don’t make more than $99,000 a year – or twice that if filing a joint tax return. And that they have no other option if evicted other than homelessness or living with more people in close proximity.

Evictions for reasons other than non-payment of rent will be allowed. The government says it will impose criminal penalties on landlords who violate the ban.

Both Bibby and Yentel are calling on Congress to enact legislation with funding to help renters and landlords. “Congress and the White House must get back to work on negotiations to enact a COVID-19 relief bill with at least $100 billion in emergency rental assistance.” Yentel says, “together with a national eviction moratorium, this assistance would keep renters stably housed and small landlords able to pay their bills and maintain their properties during the pandemic.”