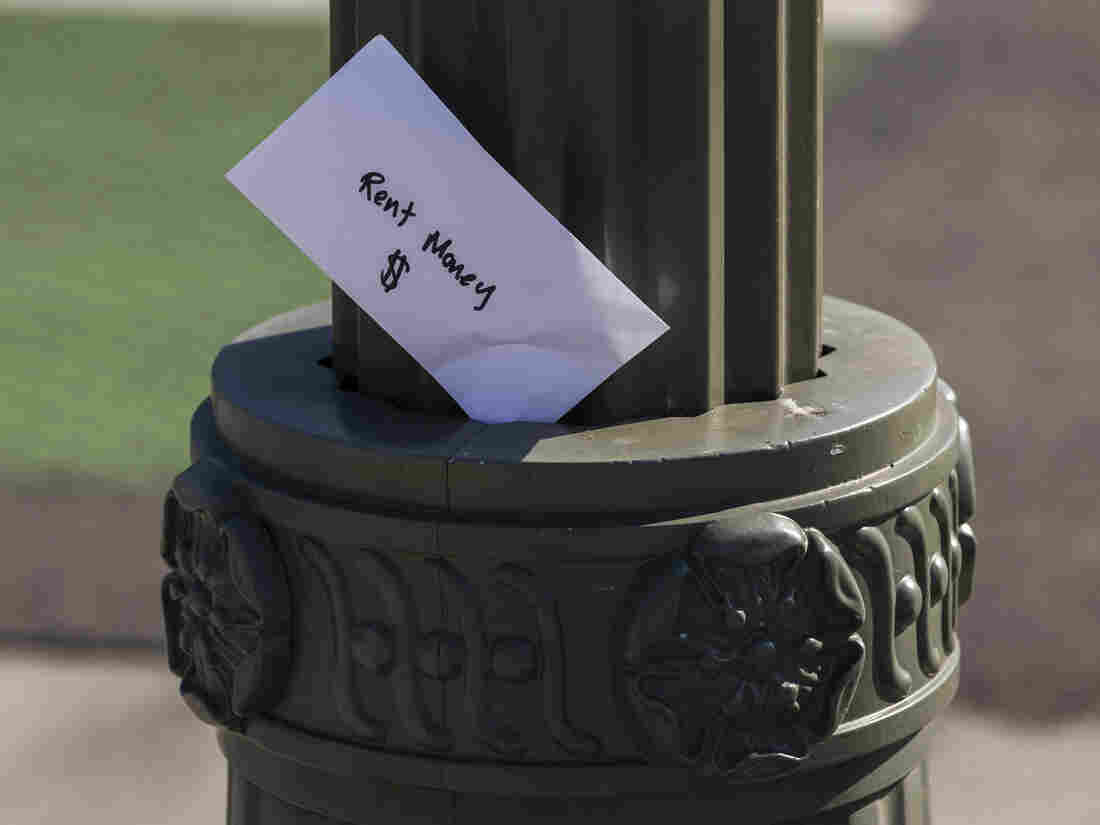 A paper envelope written with the words “Rent Money $” is left tucked in a lighting pole in April in the Boyle Heights area of Los Angeles. Amid massive job losses due to COVID-19, California Gov. Gavin Newsom signed an extended eviction moratorium on Monday. Damian Dovarganes/AP hide caption

California Gov. Gavin Newsom has signed a five-month extension to measures aimed at preventing millions of tenants from being thrown out of housing for missing rent due to hardships caused by the coronavirus pandemic.

Newsom signed Assembly Bill 3088 into law late Monday after last-minute wrangling in the California Legislature that tried to balance the demands of both landlord and tenant advocacy groups.

“COVID-19 has impacted everyone in California – but some bear much more of the burden than others, especially tenants struggling to stitch together the monthly rent, and they deserve protection from eviction,” Newsom said in a statement. “This new law protects tenants from eviction for non-payment of rent and helps keep homeowners out of foreclosure as a result of economic hardship caused by this terrible pandemic.”

In March, Newsom issued an executive order placing a moratorium on evictions through the end of May. He twice extended the order, which California’s Judicial Council voted last month to end on Sept. 1.

Under the new legislation, which goes into effect immediately, tenants who pay at least 25% of their rent from Sept. 1 through Jan. 31 will be protected from eviction. However, those who fail to meet the minimum rent payment could be removed beginning Feb. 1.

The extension also gives tenants a reprieve on unpaid rent between March and August, but allows landlords to sue for the back rent during that period beginning in March 2021.

To qualify for the protections, tenants are required to sign a declaration affirming a COVID-19 hardship.

The bill would also extend some foreclosure protections to owners of rental property of four dwellings or fewer that also meet “certain criteria, including that a tenant occupying the property is unable to pay rent due to a reduction in income resulting from the novel coronavirus.”

A previous proposal would have given renters until 2024 to begin repaying back rent and reduced the amount owed by renters who meet certain income criteria.

The California Apartment Association, which had opposed the earlier proposal, backs the bill signed by Newsom but said more help is needed.

“To truly address this crisis, the federal government needs to step up,” Debra Carlton, the association’s executive vice president of state public affairs, said in a statement. “COVID-impacted renters need financial assistance, from the feds, so they can pay their rent. Otherwise, renters will be hard-pressed to pay the rent that’s accumulated, and housing providers will go out of business.”

“This bill is going to offer really important protections for millions of Californians suffering the economic fallout of the pandemic,” he told NPR.

“But there are procedural hurdles for some tenants in accessing these protections,” he added.

Renters have 15 days each month to submit a form affirming they have a COVID-related hardship to qualify, he said. “People most in crisis, facing unemployment, illness from COVID or child care concerns may have a hard time getting those forms back in time.”

Shanti Singh, a spokeswoman for Tenants Together, a renter advocacy group, was quoted last week by the Los Angeles Times as saying that the bill signed on Monday is “better than the absolute nightmare that we are facing with evictions, but there are going to be a lot of challenges.”

“The biggest concern is: Do we think we are going to be out of this crisis by Feb. 1? Absolutely not. Are people going to magically get all of their jobs back and be able to have money to pay rent on Feb. 1? I don’t think so,” Singh told the newspaper.

California’s unemployment rate shot up from 5.3% in March to more than 16% in April and May as the brunt of the pandemic’s economic damage was felt. The latest figures suggest it has lowered slightly, to 13.3% in July.

According to a study by the Aspen Institute, barring any protections, nearly 4 million people in California would face eviction by the end of September.

A separate UCLA study that focused on Los Angeles found that between 58% and 68% of tenant households had lost income since March 13 and that about 16% of tenants paid rent late from May through July.

Despite the governor’s earlier executive order, a report by Cal Matters last month found that hundreds of people had nonetheless been evicted for missing rent payments before the order going into effect.