California Gov. Gavin Newsom holds up a vial of the Pfizer-BioNTech COVID-19 vaccine at a Los Angeles medical facility. Coronavirus cases continue to soar in the state as hospitals struggle to keep up with the surge. Jae Hong/AP

Confirmed coronavirus infections and virus-related deaths are soaring in California, the nation’s most populous state, setting new records as hospitals struggle to keep up with the onslaught of cases.

On Thursday, California reported 52,281 new daily confirmed coronavirus cases and 379 new virus-related deaths, according to state data. This brings the state’s total number of cases to more than 1.7 million, with 21,860 total deaths since the pandemic began.

According to the Los Angeles Times, which compiling its own coronavirus tally for the state, the number of Californians hospitalized due to the disease has broken records for 18 consecutive days.

The number of people in intensive care units because of COVID-19 continues to set records as well, the newspaper noted, with 14 straight days of increases.

On Tuesday, Gov. Gavin Newsom struck an optimistic tone after the first tranche of Pfizer-BioNTech coronavirus vaccines began arriving in the state.

The governor said that in addition to the 327,600 doses that arrived this week, Pfizer will distribute another 393, 900 doses next week.

“I’ve said often, there is light at the tunnel, but we’re still in the tunnel,” Newsom said, adding that the state is in the midst of the most challenging surge since the beginning of the pandemic.

The situation is particularly grave in southern California and in the state’s central, with less than 2% of ICU beds available, as NPR’s Eric Westervelt reported. 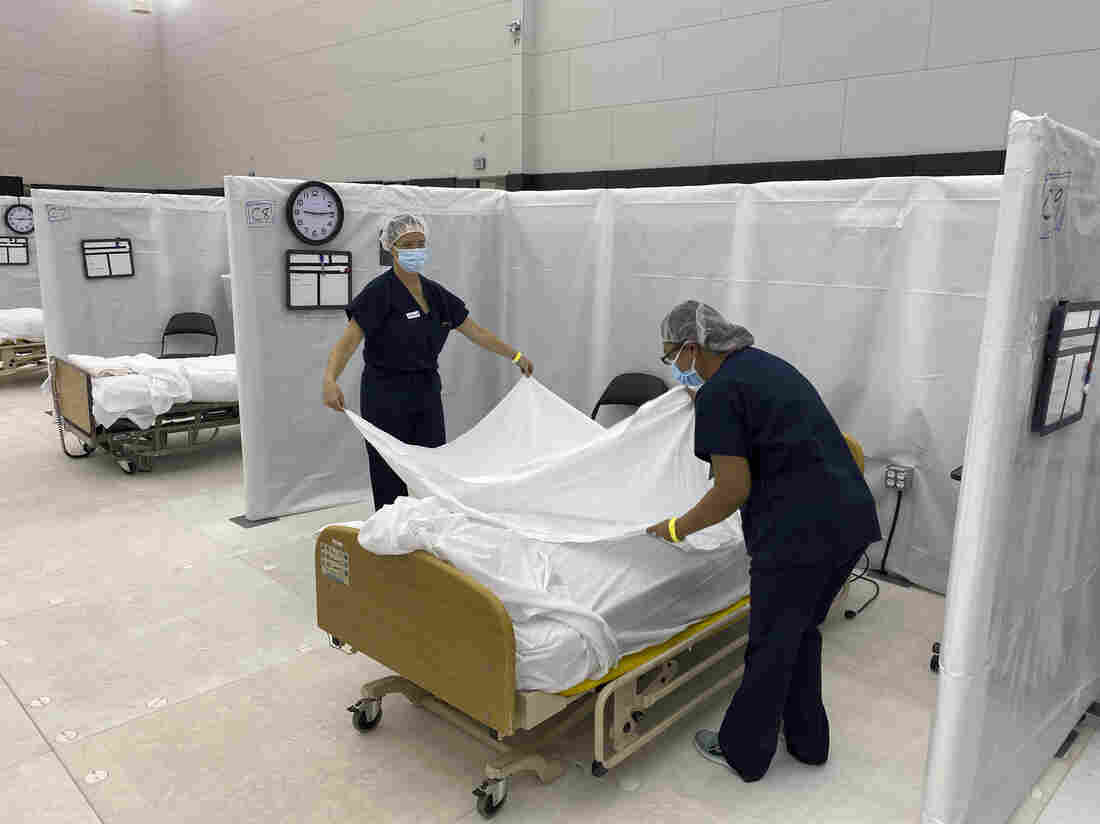 Hospital beds are set up in the practice facility at Sleep Train Arena in Sacramento, Calif. The facility is ready to receive patients as needed, as new coronavirus infections and deaths rise in the state. California OES /AP

According to the California Office of Emergency Services (OES), a mass fatality is an incident where more deaths take place in a period of time than can be handled by local coroner or medical emergency personnel.

Newsom said the state has 60 refrigerated units, each 53 feet long, available if needed. He also said that 5,000 body bags were distributed to some of the hardest-hit counties, including Los Angeles, San Diego and Inyo counties.

The spike in new infections, which began in October, is being largely blamed on Californians ignoring safety protocols and socializing with others, according to The Associated Press.

Mark Pazin, the state’s OES chief, told Sacramento-based NBC affiliate KCRA said the purpose of the program is to ensure localities are not overwhelmed by the spiking death tolls.

“Words sometimes can’t explain what we’re facing, but suffice it to say, everyone is stepping up to the plate here in the state of California,” he added.

Much of California remains under stay-at-home orders triggered by regions in the state that have less than 15% ICU availability.

The orders, which went into effect on Dec. 5, will remain in effect for at least three weeks. After that, counties will be eligible to sunset the stay-at-home order if “ICU capacity projected four weeks out reaches 15 percent,” according to the governor’s office.

The coronavirus is putting strain on Americans and the nation’s hospital systems across the county. On Wednesday, the U.S. reported its highest number of single-day fatalities since the pandemic began, with more than 3,600 in the U.S. succumbing to virus-related complications.