An aerial view showing a coffin being buried at the Vila Formosa cemetery in Sao Paulo, Brazil, late last month. Brazil has been experiencing record numbers of coronavirus infections and COVID-19 deaths in recent weeks.

A new surge of COVID-19 in Brazil is filling hospitals and morgues, as the country’s record daily death toll from the disease is nearing even the grim U.S. peak in January.

With less than two-thirds the population of the U.S., Brazil logged nearly 4,200 deaths on Tuesday. That is close to the peak U.S. daily death toll of 4,476 recorded on Jan. 12, according to data maintained by Johns Hopkins University.

The rise in cases comes as Brazil is fighting a more easily-spread variant of the virus that has reportedly swept the nation in recent months.

Brazil’s federal government has left it to the states to control the virus, but the country’s right-wing president, Jair Bolsonaro, has been openly hostile to such restrictions, which he says have damaged the economy. His supporters have also taken to the streets to protest quarantine measures. 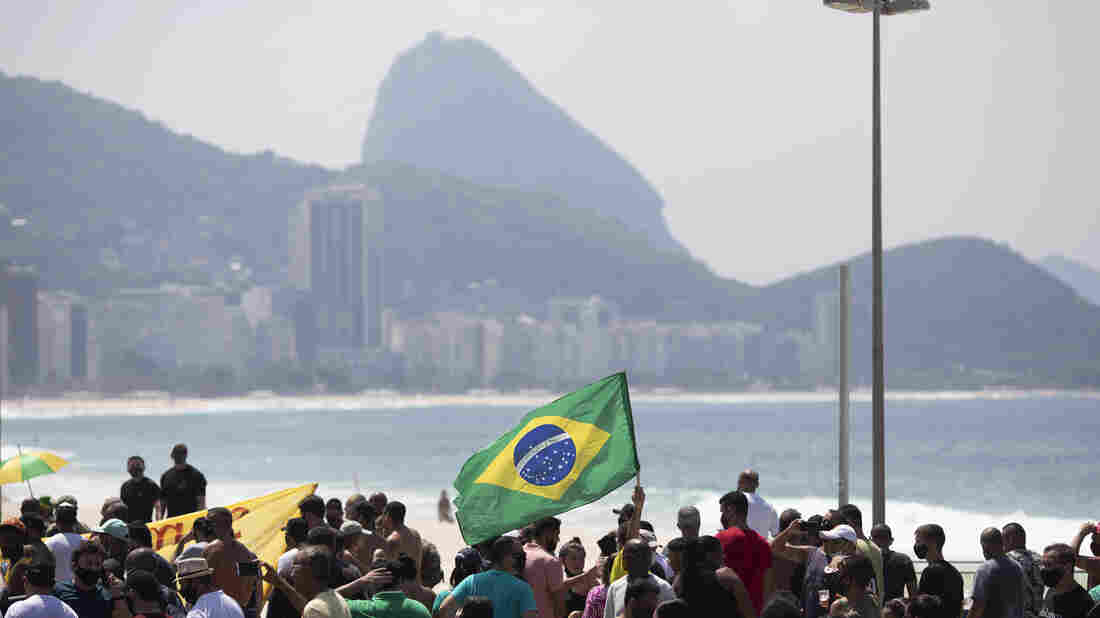 One local mayor told NPR last month that she has received death threats for instituting a partial lockdown in her city.

Intensive care units across the country have been operating at near capacity for weeks, and officials are warning that the pandemic is quickly overwhelming health care infrastructure. A bulletin issued by the Brazilian medical research institution Fiocruz on Tuesday said that the lethality of coronavirus has more than doubled to 4.2% from around 2% at the end of 2020. Fiocruz attributes the increased death rate to the inability to quickly and correctly diagnose serious cases of COVID-19 and to overloaded hospitals. It warns of the “collapse of the health care system.”

Bolsonaro, much like former U.S. President Donald Trump, has long downplayed the pandemic and promoted discredited treatments, namely the anti-malarial drug hydroxychloroquine, which scientists have said is useless in preventing or treating coronavirus. Also like Trump, the Brazilian president was himself once infected with the virus.

Bolsonaro, a retired army captain, marked his 66th birthday last month by appearing outside the presidential palace to greet supporters. Before a cheering crowd, he yanked off his face mask and laid into governors and mayors for imposing quarantine measures.

“Some little tyrants, or tyrants, hinder the freedom of many of you,” Bolsonaro told the crowd.

On Tuesday, Bolsonaro again criticized lockdowns, suggesting without evidence that they caused obesity and depression, the BBC reported.

Meanwhile, Brazil’s government has been slow to acquire life-saving vaccines as Bolsonaro has been accused of politicizing the vaccine process.

Brazil lags behind many other countries in the percentage of its citizens inoculated against coronavirus, with less than 3% fully vaccinated, according to Bloomberg.