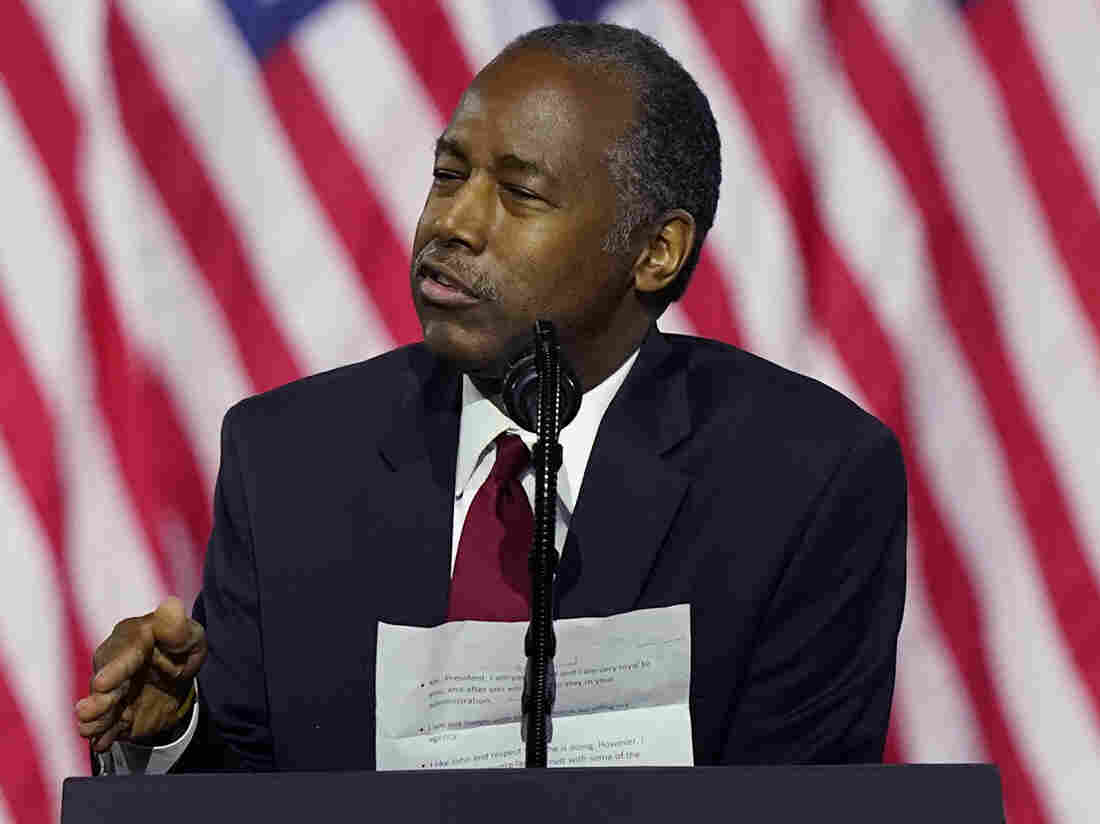 Secretary of Housing and Urban Development Ben Carson holds notes as he speaks during a campaign event before President Donald Trump at the Cobb Galleria Centre, in Atlanta in September. Carson is the latest White House official to test positive for the coronavirus. John Bazemore/AP

Ben Carson, the secretary of the Department of Housing and Urban Development, has tested positive for coronavirus, the agency said Monday. The news comes days after several other top Trump administration officials were also found to be infected with the deadly virus.

“Secretary Carson has tested positive for the coronavirus,” HUD Deputy Chief of Staff Coalter Baker confirmed in an email to NPR. “He is in good spirits and feels fortunate to have access to effective therapeutics which aid and markedly speed his recovery.”

Carson, 69, is the latest in a slew of high-ranking officials who have contracted the virus, including President Trump and the first lady. Mark Meadows, Trump’s chief of staff, also recently tested positive for the coronavirus.

A retired neurosurgeon who has been a staunch supporter of the president, Carson was treated briefly at the Walter Reed Military Medical Center in Bethesda, Md., according to ABC.

Like Meadows, Carson was at an Election Day watch party in the White House East Room last Tuesday, though it wasn’t immediately clear if that might be where he became infected.

News of Carson’s positive test came as President-elect Joe Biden reiterated his message of mask-wearing as a way to prevent the spread of COVID-19. Biden warned of a “very dark winter” looming, with the U.S. seeing record infections in recent weeks.

“A mask is not a political statement, but it is a good way to start bringing America back together,” Biden said on Monday. “The goal is to get back to normal as fast as possible.”

Biden earlier Monday announced the formation of a 13-member Transition COVID-19 Advisory Board charged with drawing up a blueprint for responding to the pandemic.

Also on Monday, pharmaceutical giant Pfizer and its partner, BioNTech, announced that their experimental vaccine was 90% effective in preventing COVID-19 — news that sent shares on Wall Street into a sharp rise.