People associated with the Australian Open are seen lining up at a testing facility at the View Hotel on Thursday in Melbourne, Australia. Victoria state has reintroduced COVID-19 restrictions after a hotel quarantine worker tested positive for the coronavirus on Wednesday. Asanka Ratnayake/Getty Images

A confirmed COVID-19 case at a quarantine hotel in Melbourne, Australia, is forcing organizers of a major tennis tournament to mandate that more than 500 players and their staffs “be tested and isolate until they receive a negative test result” just days before play is set to begin.

Athletes prepping for the Australian Open, the year’s first Grand Slam tournament and scheduled for Feb. 8 – 21, will not be permitted to leave their rooms until they test negative for the coronavirus.

Australian Open officials also announced Thursday that all of the tuneup matches for the day have been canceled.

“We will work with everyone involved to facilitate testing as quickly as possible. There will be no matches at Melbourne Park on Thursday,” Australian Open officials said in a statement.

Australian Open Director Craig Tilley told reporters Thursday that matches scheduled for Thursday were going to be rescheduled for Friday.

“Those 507 players and their teams that were in the quarantine hotel between the 16th and the 29th of January were immediately notified last night that when they got up this morning … we would start testing and all of them would have to isolate,” Tilley said.

It’s been a big 24 hours, and tennis is back on Friday. #AusOpen pic.twitter.com/PHiYWlQsVH

He also noted of those 507 people being tested, there were 160 players.

“The probability is very low that there’s going to be any issue. We fully expect them all to test negative and then we continue with play tomorrow like we originally planned,” Tilley said.

He noted most are considered casual contacts of the person who tested positive for the coronavirus, while some 50 staff are considered close contacts and will have to quarantine for two weeks.

“We’re absolutely confident the Australian Open is going to go ahead,” Tilley said.

Premier Daniel Andrews of Victoria state announced late Wednesday local time that a 26-year-old who had been serving as a resident support officer for the tennis tournament had tested positive for the virus. 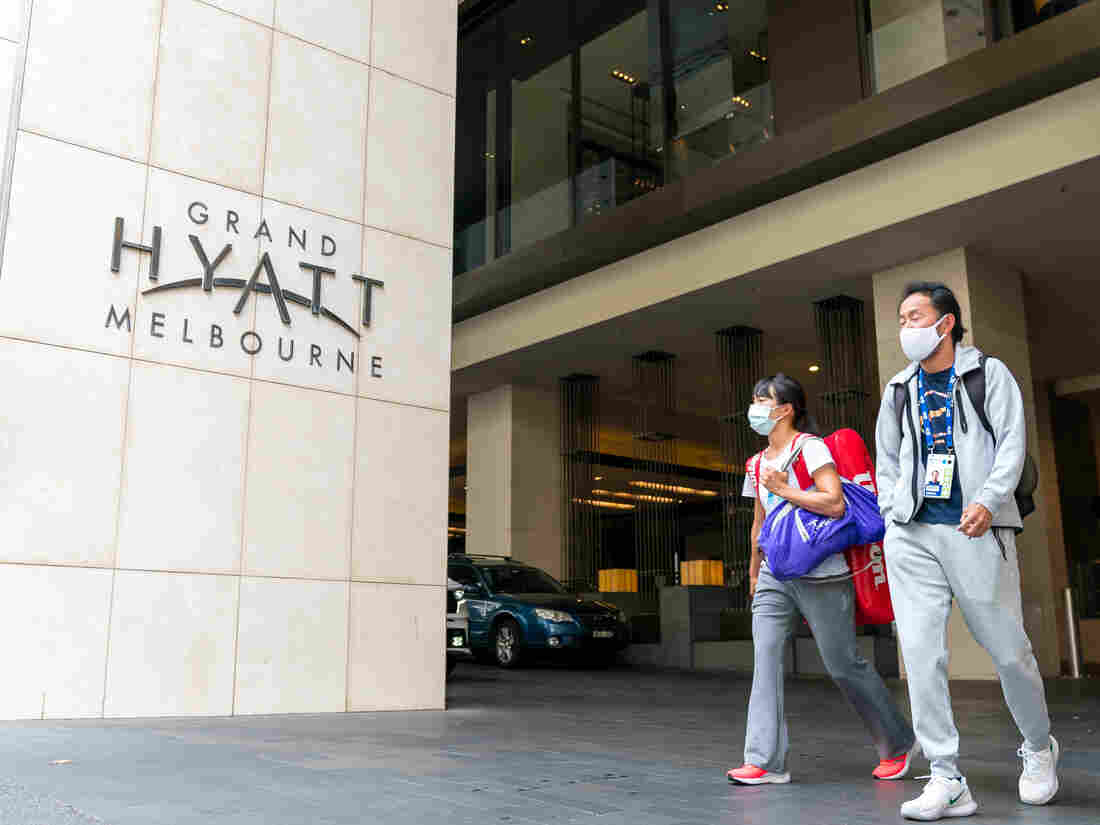 Players and their entourages emerge from the Grand Hyatt Melbourne on Thursday. A positive case was discovered at one of the Australian Open quarantine hotels, with some 500 Australian Open players, officials and support staff told to quarantine and get tested. Andy Cheung/Getty Images

He said the individual, who has not been named, last worked at the Grand Hyatt Melbourne on Jan. 29. The individual took a PCR test after that shift, which returned a negative result for the virus, according to Andrews. Days later, the premier added, the individual developed symptoms and has since tested positive.

“This is one case, there is no need for people to panic,” Andrews said, while also announcing he is reinstating a number of restrictions for the state “out of an abundance of caution.”

Some of those restrictions include capping private gatherings at 15 people or fewer; making it mandatory to wear masks indoors; and a “pause” on plans to have 75% of public and private sector employees returning to the office which was set to go into effect on Monday. Instead officials said the “current cap of 50% will remain in place.”