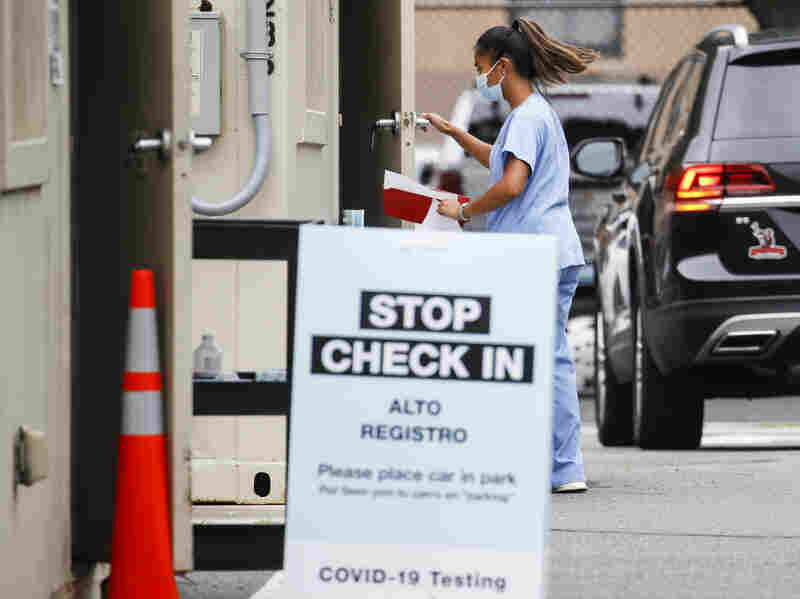 Six states have an agreement to acquire fast-result antigen tests for COVID-19. Pictured is a medical worker collecting a sample from a patient. John Minchillo/AP hide caption

Six states led by a bipartisan group of governors are joining together in an effort to speed up coronavirus testing. As the nation’s death count continues to rise above 150,000, the states say they will jointly purchase 3 million rapid antigen tests that can quickly detect the virus.

Maryland Gov. Larry Hogan, the outgoing chair of the National Governors Association, said in a statement the multi-state compact will address “severe testing shortages and delays” that have hamstrung the nation’s response to the virus. In addition to Maryland, the group includes Virginia, Louisiana, Michigan, Ohio, and Massachusetts.

Hogan, a Republican, has been critical of President Trump’s response to the pandemic. In a recent op-ed in the Washington Post, Hogan said Trump had described watching in frustration as the President “bungled” the national response to the spread of the virus.

“Eventually, it was clear that waiting around for the president to run the nation’s response was hopeless; if we delayed any longer, we’d be condemning more of our citizens to suffering and death,” Hogan wrote. “So every governor went their own way, which is how the United States ended up with such a patchwork response.”

Under an agreement signed by the state’s governors – three Republicans and three Democrats – each state will receive 500,000 tests that can detect the virus in 15 to 20 minutes.

While new antigen tests work quickly, as NPR’s Rob Stein has reported, there are questions about their accuracy in comparison to the more complicated genetic tests that many patients are receiving.

The governors’ memorandum says the group intends to “benefit as many interested states as possible.” Other state and local governments may also join the effort to buy rapid tests in the coming weeks.

According to a statement from Hogan’s office, the program is intended to demonstrate to private manufacturers that there is “significant demand” to scale up production of rapid tests. The states are working with two manufacturers of FDA-authorized tests.