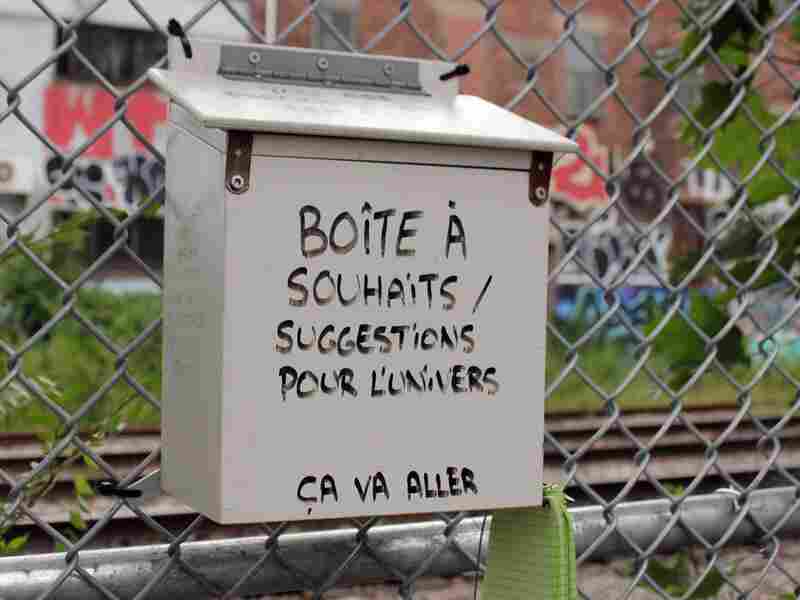 The “box for wishes/suggestions for the universe,” first appeared in Montreal in April. Emma Jacobs/NCPR hide caption

This spring, in Montreal, a box appeared on a fence beside a popular walking path and freight rail tracks that run through my neighborhood. It was painted white with black lettering reading: “Box for wishes/suggestions for the universe. All topics accepted.”

Later on, a notepad and pen on a string got added, then replaced. Curious, I left a note on the cardboard backing the last time the paper ran out. The next day, I got a text from François: he’ll be at the box, late, to collect the latest suggestions.

When François turns up, he says he lives close by so he sees the box during the day, but waits to attend to it until after dark or early in the morning to avoid being seen.

That way, he says, “it stays anonymous, kind of a mystery. So, people don’t address a person, they really address the box.”

François, 38, has lived in Montreal for two decades and created other art installations. He asked NPR not to use his last name because the fence is private property.

Back in April, he says, during a near-total pandemic-related shutdown, “people had things they needed to express. And I wanted to offer them a different way to express them than on social media or the press […] where they wouldn’t be read right away and commented on by everybody.”

He takes a small electric drill out of his bag, which he uses to open the lid to collect the papers inside. He says he has received about 300 notes in all.

“The main topics have always been love,” says François, then, “work, studies or financial worries. After that, in third place, is health or the current situation around the pandemic,”

“Dear universe,” reads one note that he unfolds. “Me again. I hope to find my dream job, that reflects my values, before October.”

“That Jason learns by heart his addition subtraction, multiplication and division,” reads another.

One person wishes to find an apartment in the neighborhood with cool roommates. Someone else wishes for the world to take adolescent depression and suicide more seriously. From a five-year-old: “No more pollution. No more COVID-19.” Someone wishes for friends.

François says the notes give him a sense of Montreal’s mood, the “pulse of the city,” as he puts it.

“I think right now, wishes and suggestions are more are deeper than it used to be in June, for example,” he says.

François doesn’t have plans for the notes. He says he thinks the box is most useful for people to express them.

“I think that the first step in realizing our wishes is to be able to name them. So just the fact that someone can reflect and define something clearly enough to write it down on a piece of paper, that’s maybe the first step towards something more concrete,” he says.

He plans to keep collecting the letters as long as the box lasts. If it disappears one day, maybe that’s what the universe had in mind.