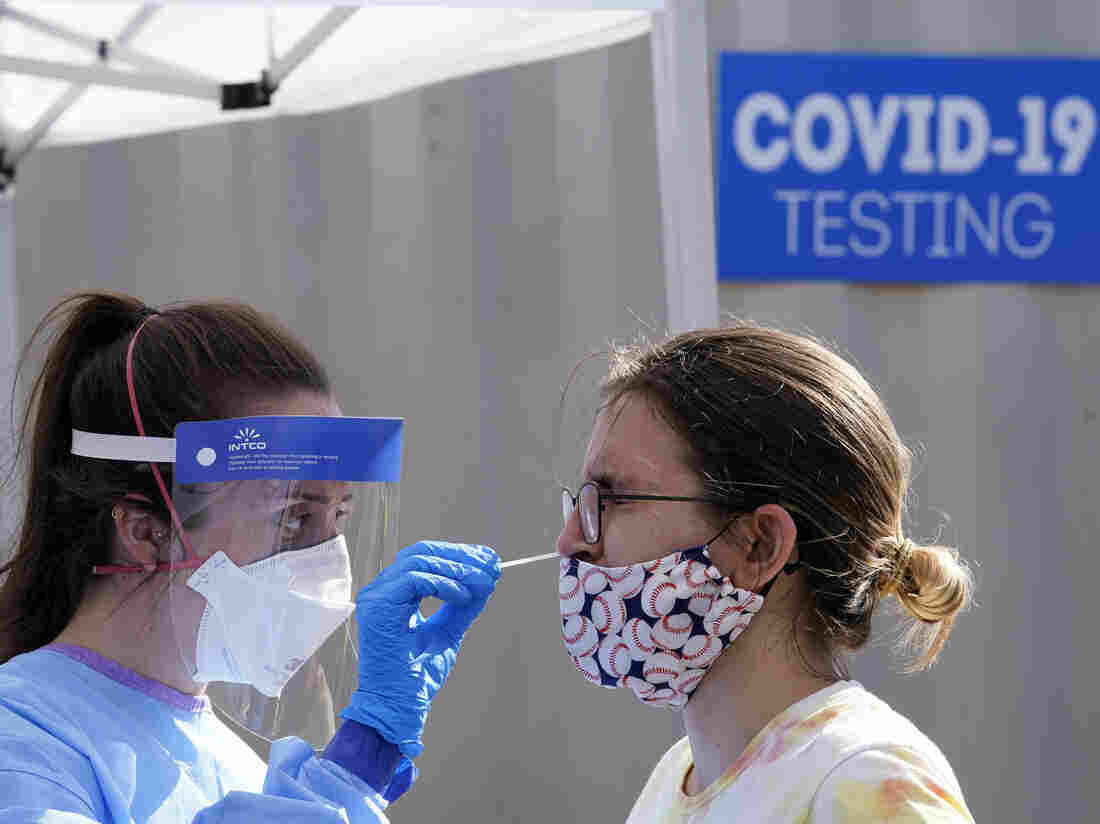 A woman is tested for COVID-19 at a walk-up testing site on Friday in Seattle. Testing availability and reliability continue to be problems in the U.S. fight against the coronavirus. Elaine Thompson/AP hide caption

Fewer than eight months ago, the U.S. had yet to experience its first confirmed case of a deadly disease that was sweeping through China and threatening to go global. Today, more than 6 million Americans have been infected with SARS-CoV-2 coronavirus and some 183,000 have died from it, according to a tally maintained by Johns Hopkins University.

And while 6 million is the number of confirmed cases in the U.S., experts warn that it is an undercount. Epidemiologists say tens of millions more cases have not been recorded. In June, the head of the Centers for Disease Control and Prevention, Dr. Robert Redfield, estimated that for every case reported, there were 10 other infections.

Although the numbers of COVID-19 deaths each day have declined slightly in recent weeks, the U.S. continues to see about 42,000 new cases daily. Several states, including Iowa, North Dakota and South Dakota, and Hawaii, have reported a surge in new cases in recent days.

“August should have been a slow month. We should have seen infection levels come down in July and August. They didn’t. We saw an epidemic cross over the Sun Belt and we saw infections actually increase,” he told CBS’ Face The Nation on Sunday.

Still, he said there are some positive trends: a decline in case numbers and hospitalizations.

But Gottlieb warned that the months ahead will be challenging: “As we head into September and October, kids back to school, people start to return to work, we’re likely to see infections start to go up again.”

That has been true at colleges around the country. Some universities reopened for in-person classes, only to see immediate outbreaks on campus.

The University of Alabama, Tuscaloosa, reports more than 1,000 student cases since Aug. 18, the day before the school reopened. The University of Missouri now has more than 300 active cases among students. UNC-Chapel Hill sent students home after 130 of them tested positive in the first week of classes. At Georgia College, more than 550 cases have been reported since June 18.

There have been some medical advances in recent months that have helped healthcare professionals save lives of those who get the disease. For instance, early studies found the antiviral drug remdesivir can help some hospitalized patients with COVID-19 recover faster.

Many of the issues that the U.S. saw early on in the pandemic persist: Shortages of masks and protective gear. Testing backlogs. The politicization of masks. Scorn and threats aimed at public health officials.

Meanwhile, the disease has crippled the U.S. economy, leading to massive layoffs and business closures not seen since the Great Depression, and has helped fuel civil unrest across the country.

Unemployment has skyrocketed. After hitting 14.7% in April, the unemployment rate is still above 10%. Nearly 30 million Americans are receiving unemployment benefits.

But the economic pain is spread unevenly. While the country is in a recession and many people are out of work, home sales are booming and the stock market has rebounded.

Parents are struggling to juggle jobs and childcare as students start the school year learning at home. Young people are moving home to live with their parents and trying to find jobs in a suddenly weakened economy. Many people, including the elderly, are dealing with isolation and loneliness as the necessity of social distancing makes normal interactions more difficult.

The ongoing stress of the pandemic is taking a toll on Americans’ mental health. More than 1 in 3 Americans reported symptoms of anxiety or depression in a recent pulse survey by the U.S. Census Bureau. A year ago, that figure was 1 in 10.

The U.S. is far from the only nation struggling. Worldwide, the number of confirmed cases has surpassed 25 million, with more than 846,000 deaths.

Some countries found early success in controlling the virus, only to be faced with a fresh wave of cases now.

India has become a new epicenter for the disease, with 78,000 new cases reported on Saturday. The country went into lockdown in March, followed by an easing of restrictions in June when its case numbers were relatively low. The virus is now surging there, with daily cases outpacing those in both the U.S. and Brazil.

France came out of two months of lockdown in mid-May, during which its cases and deaths were largely brought under control. But on Friday, the country saw its highest case count since March, and masks are now required in Paris and its suburbs.

A successful vaccine could help life return to normal — though there are concerns that the process of bringing a vaccine to market in the U.S. will be complicated by politics.

“We have two ways out of this pandemic. One is hygienic measures — which we don’t seem very good at — and two is the vaccine,” Paul Offit, a vaccine developer at Children’s Hospital of Philadelphia and a member of the FDA’s vaccine advisory committee, recently told NPR’s Joe Palca.

“The vaccine is our best way out of it at this point,” Offit said. “And to shake the American confidence further with either an unsafe or ineffective vaccine would be, I think, a disaster.”