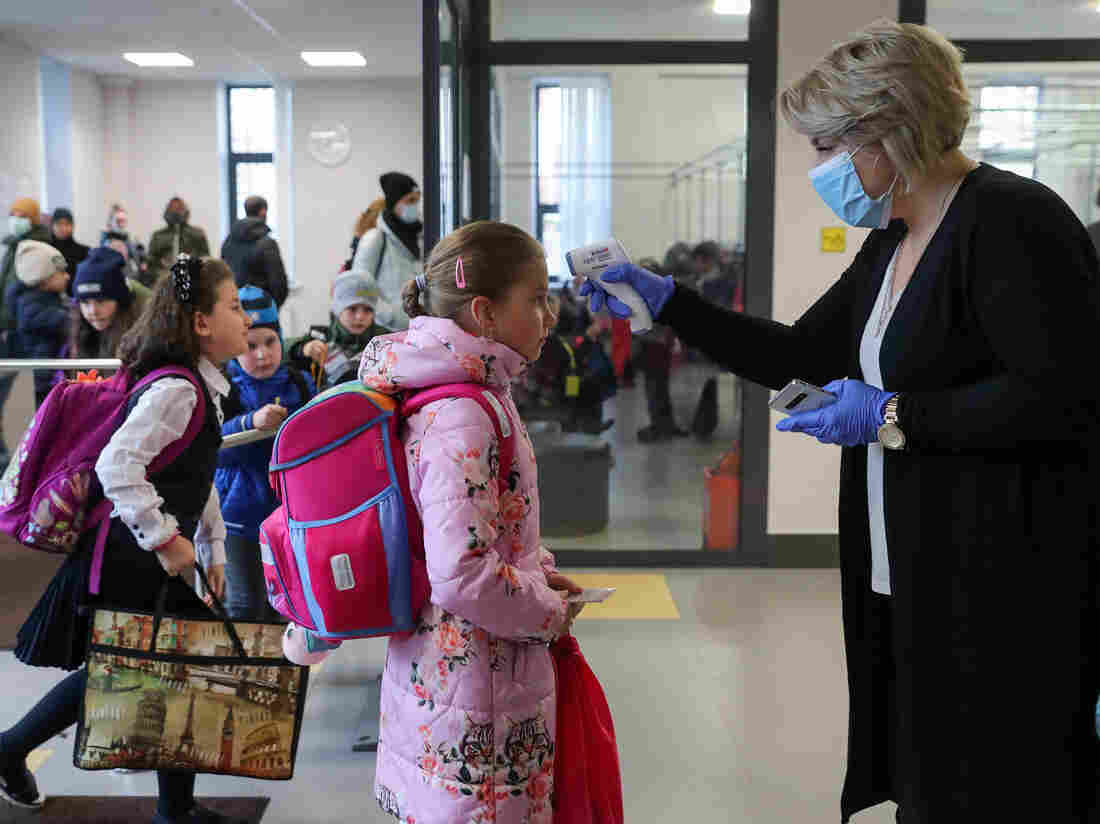 More than 40 million coronavirus infections have now been reported worldwide. Here, a staff member at a school in Moscow uses an infrared thermometer on Monday to screen students. Moscow schools reopened after a two-week fall holiday, but a rise in cases means only primary school pupils will be in classrooms. Sergei Fadeichev/TASS via Getty Images hide caption

The world hit a new benchmark in the COVID-19 pandemic on Monday, surpassing 40 million coronavirus infections, according to data compiled by Johns Hopkins University. With the flu season looming, the rate of new cases in the U.S. and other countries is rising at rates not seen in months.

The disease has killed more than 1.1 million people, including nearly 220,000 in the U.S., which remains the world’s worst-hit country despite having less than 5% of the global population.

A worrying rise in new cases has triggered new shutdowns across Europe, where France, Belgium and the Czech Republic are among the countries seeing a surge in cases. Many of the measures announced this month are local or partial closures, as officials try to avoid the national lockdowns that have wreaked economic havoc in 2020.

India has seen its rate of new cases fall in recent weeks, after a meteoric rise in August and September. More than 114,000 people there have died from COVID-19.

The U.S. once again has the highest new case rate in the world. The seven-day daily average in the U.S. is nearing the 60,000 mark — the level the country maintained for weeks this past summer during an alarming surge.

“New cases have gone up by nearly 30% from two weeks ago” in the U.S., as NPR’s Will Stone reports.

The 10 countries with the most infections as of Monday morning are:

By February of next year, the global death toll could rise to 2.4 million people, according to a widely cited fatality projection by the Institute for Health Metrics and Evaluation, or IHME, a research center at the University of Washington. The institute warns that an additional 1 million people could die if health mandates are eased.

Health experts are urging people to wear face masks and to get vaccinated against the seasonal flu, hoping to minimize an illness that normally kills between 12,000 and 61,000 people in the U.S. each year. Cooler temperatures will mean people spend more time indoors — where both influenza and the coronavirus are more easily spread.