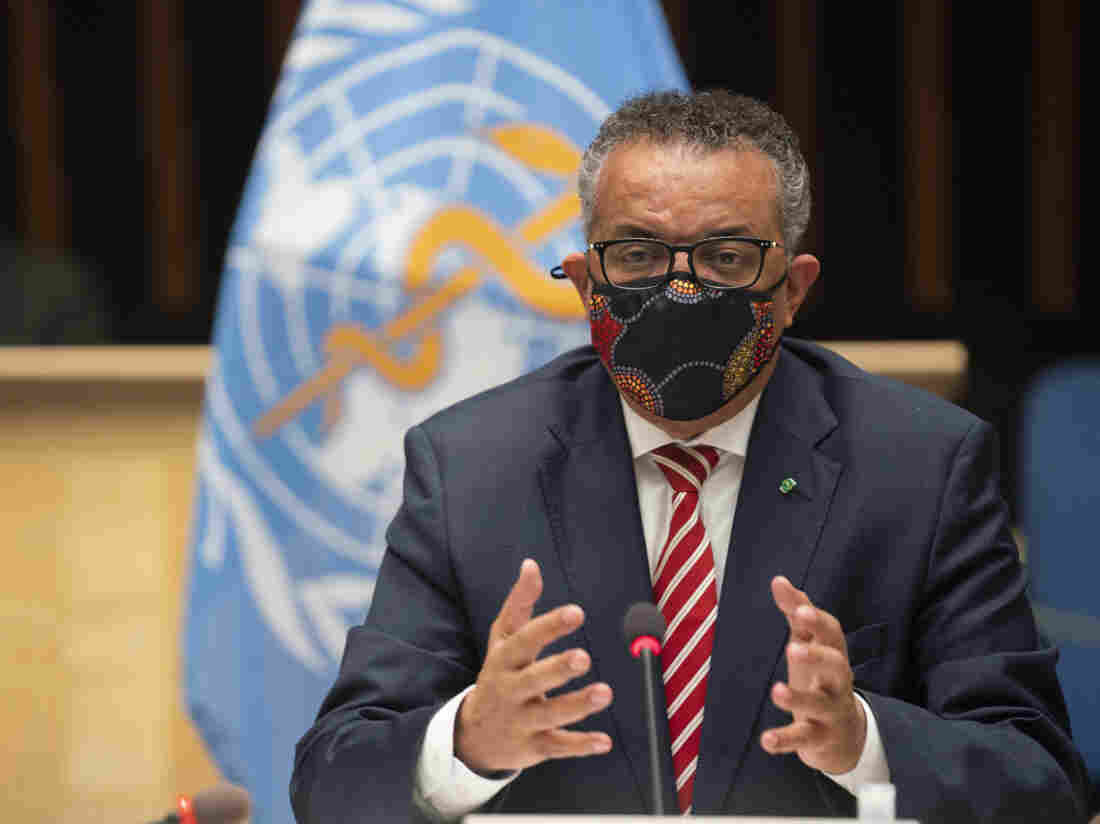 WHO Director-General Tedros Adhanom Ghebreyesus, shown here at a meeting on Monday, has said that the coronavirus death toll is likely higher than the more than 1 million fatalities officially reported. Christopher Black/AP hide caption

About 10% of the global population may have been infected by the coronavirus, according to a senior World Health Organization official.

It’s an estimate that’s far higher than the total of global confirmed cases reported by governments. At the same time, it would mean that most of the world’s population is still vulnerable to getting infected and this pandemic is far from over, the WHO’s head of emergencies Dr. Michael Ryan said Monday.

“This varies by country, it varies urban to rural, it varies by different groups,” Ryan said. “But what it does mean is that the vast majority of the world remains at risk.”

The WHO’s executive board is meeting in a special session Monday and Tuesday to review the WHO’s handling of the coronavirus pandemic.

The meeting at the WHO’s headquarters in Geneva and online comes as the world has officially tallied more than 35 million coronavirus cases and more than 1 million fatalities.

The WHO’s Director-General, Tedros Adhanom Ghebreyesus, said the actual number of deaths from COVID-19 is certainly higher. “Numbers can blind us to the reality that every single life lost is someone who loved and was loved by others – someone’s mother, father, sister, brother, daughter or son,” Tedros said through a mask as he opened the meeting.

Tedros and other officials highlighted the WHO’s actions throughout the pandemic, from issuing guidance, to developing the first diagnostic test for SARS-CoV-2, to distributing personal protective equipment in low-income countries and expanding PCR testing labs globally.

Ryan said his agency — and the world — are now heading into a difficult phase of this pandemic.

“The disease continues to spread,” he said. “It is on the rise in many parts of the world.”

Cases are spiking most dramatically now in India, but many parts of Latin America are still facing rising daily infection rates. There have been resurgences in several European nations. And in the United States, the number of new infections remains stubbornly high, with the U.S. regularly recording roughly 40,000 cases per day. This is more than Ireland has tallied over the past 9 months.

Ryan said the pandemic will continue to evolve. It may flare up in some places while it wanes in others. But he added that where the pandemic becomes more intense, or gets under control, is not a matter of chance.

“We have the tools that work to suppress transmission and save lives right now. They are at our disposal,” he said. “The future depends on the choices we collectively make about how we use those tools.”

The WHO is also working to develop new tools to combat COVID-19.

It’s helping to test several vaccine candidates and developing plans for how to distribute a vaccine equitably once one is finally approved. It’s working on new drugs to treat the disease and new tests to detect it.

In his presentation to the executive board, Ryan noted that those efforts are currently woefully underfunded. He said the WHO needs $14 billion immediately and more down the road to fund what it calls its ACT Accelerator program (Access to COVID-19 Tools or ACT) to develop new pharmaceutics to fight against COVID-19.

Representatives from 34 countries are on the executive board of the WHO. Even though the Trump Administration declared that the United States is leaving the WHO, the U.S. still has a spot on the board.

Prior to the meeting, it was unclear whether the U.S. would send a delegation. The U.S. is participating, although remotely. Assistant Secretary for Health Brett Giroir is leading what his office described as a “small delegation from the United States.” They’re all attending virtually.

“While the U.S. government prepares for U.S. withdrawal from the WHO,” Giroir said in a statement, “the United States will in the interim continue to contribute to the WHO to strengthen discussions and advocate for a WHO that is independent, impartial and transparent in all of its operations and activities.”